For about a year from mid-2010 to early 2011, my friend Carl Middleton and I travelled across the countries of the Mekong region with a video camera. Our objective was to film the extraordinary fish biodiversity of the Mekong River and its ecosystems not only through the eyes of the fishers who depend on the fishing but also those who make their livelihoods from selling and processing as well as those who cook and eat the fish as part of their daily meals. 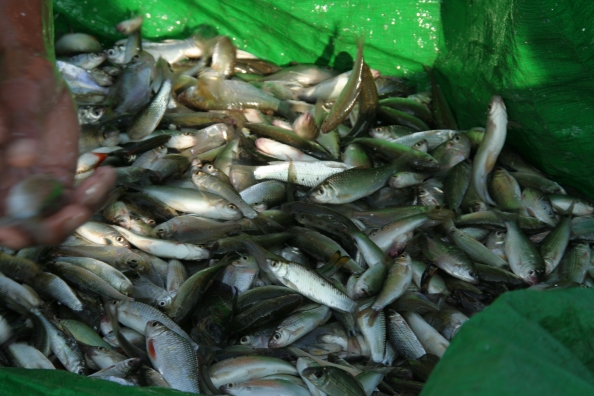 We filmed fishers and fish sellers near rivers, streams, canals and wetlands, and talked to them about their relationship to the river, its fish and to markets near and far. We marvelled at the incredible number of ways that the fish catch is processed: fermented, smoked or dried, salted or marinated in spices. We ate many kinds of fish preparations in homes, markets and restaurants and talked to cooks and chefs and fish sellers about their favourite recipes and fish dishes.

“The Mekong: Grounds of Plenty”

A film about how the plentiful fisheries of the Mekong River and its tributary ecosystems provides a web of connections across livelihoods, food and culture in the Mekong region and beyond.

The rich fisheries and ecosystems of the Mekong River not only feed people living alongside the river but are crucial for the livelihoods of millions of people across mainland Southeast Asia.

The film shows how the fish from the Mekong River and its tributaries are caught and sold, cooked and consumed, by the people in the Mekong region.

Caught using an array of nets, baskets and traps, and cooked in many amazing ways, the wild fish catch provides protein and essential nutrients. Yet, the interconnection between the Mekong River’s well-being and the fish on a family’s plate is not so apparent in the urban centers. The film shows the Mekong River’s wild fish being caught and processed, and its passage through networks of trade as people work through the night and day to transport the catch to villages and towns, to markets, homes and restaurants (read more).

Filmed in over 30 locations across the Mekong region from Cambodia and Laos to Thailand and Vietnam.

Produced by: Mekong Program on Water, Environment and Resilience (M-POWER), Unit for Social and Environmental Research (USER) and International Rivers

Available for onscreen viewing at: http://www.cultureunplugged.com/documentary/watch-online/play/7225/The-Mekong—Grounds-of-Plenty.

The film was screened at: